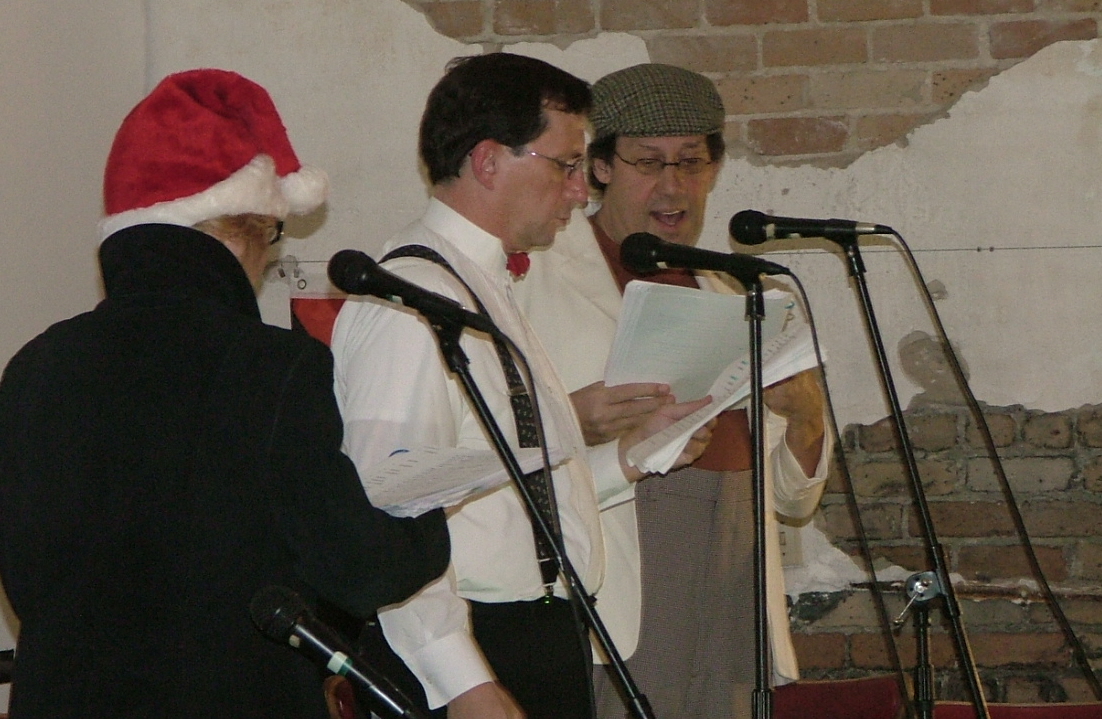 The production was organized and performed by members of NOLA Voice Talent to benefit post-Katrina regeneration and rebuilding, via the local non-profit organization Common Ground Relief. And, from the audience response to this first performance, the organizers have confirmed they will be repeating the production as an annual New Orleans holiday event.

This was also a dream come true for voice-actor Bill Lee, a native of New Orleans, who has long held an ambition to play the role of George Bailey in such a radio-stage production. His James Stewart style voice and delivery was as authentic as any, and he was purposely the only member of the cast to attempting to "impersonate" any of the actors 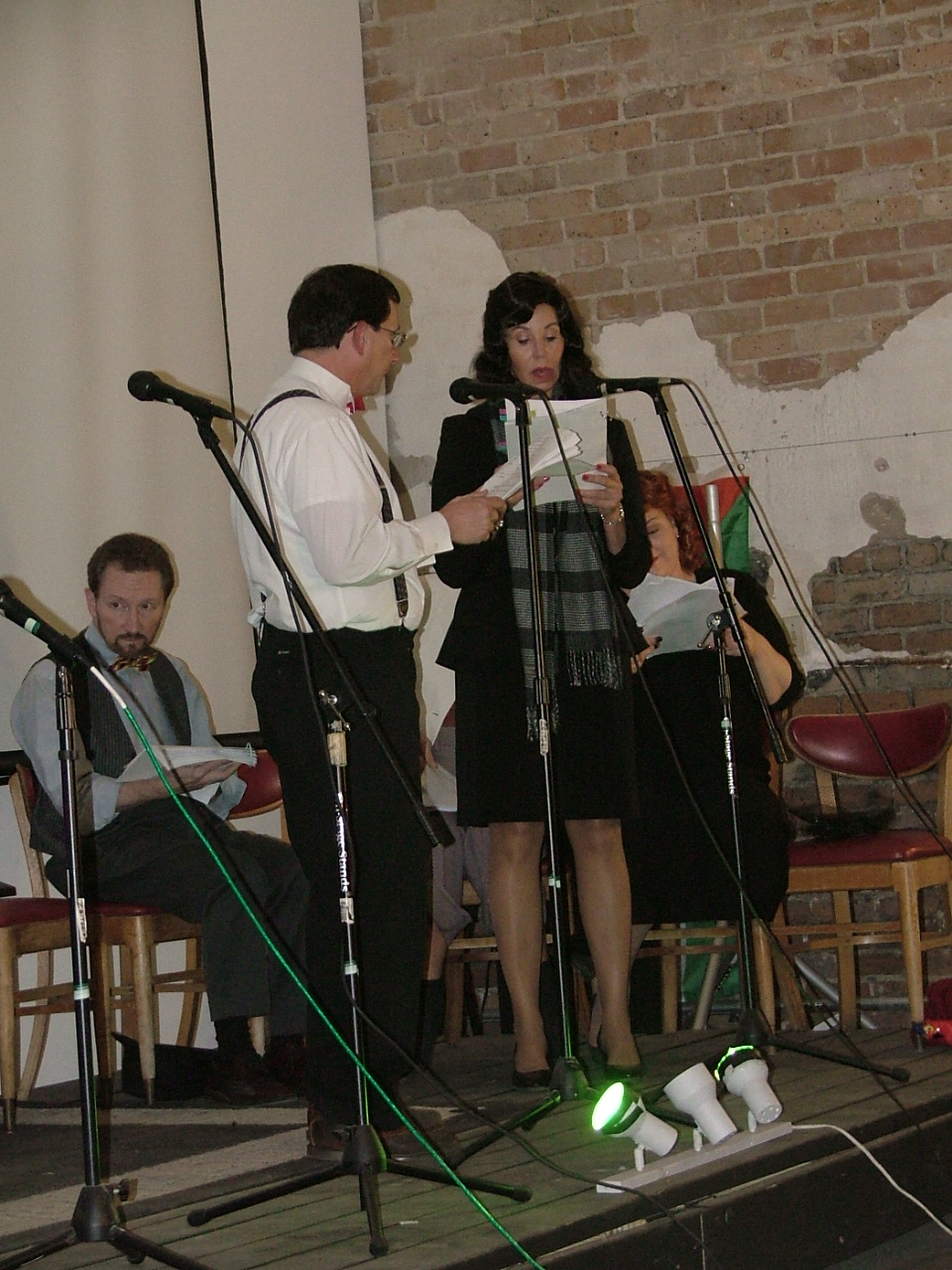 Convincing in his role as the evil Henry Potter was Greg Beaumont who relished being the villain of the peace; while the character of Clarence was transformed with the goofy style of British voice-actor Stephen James, who as director also brought the cast together for a most polished performance.

However, the show belonged to leading lady Terry Spitale who was outstanding in the role of Mary Bailey, a character who had to come to terms with the changing personalities of her stage husband, George.

Director Stephen James said that everyone's performance was of such a high standard that it was difficult to pick out any individual names. "It was a team effort and every single performer was a star," said Stephen. "The junior actors Sammie Titus and Noelle Trotter were magnificent as Janie and Zuza Bailey; young Greg Beaumont Jnr played young George Bailey and Petey Bailey with great enthusiasm; stellar performances from Alaraby Johnson as the Superintendent to the angels and a most convincing Violet Bick; and Paul Watson, John Tran, Valerie Titus, Angie Trotter and Al Spitale, were all excellent in their multiple roles."

Stephen added: "The stage experience of singers Sydney Beaumont and Kristin Samuelson also shone through; while sound engineer Stuart Lob and his team of Elizabeth and Catherine Lanier held the performance together with background music and some amazing sound effects."

NOLA Voice Talent is already looking forward to repeating the show next year. Concluded Stephen James: "We have put together a tremendous package this year as a foundation to demonstrate to sponsors and associates the high standards we are capable of achieving. The audience, too, was tremendous and we are already planning to repeat the production in New Orleans on an annual basis."

With just a limited number of tickets remain available for NOLA Voice Talent's inaugural annual production of "It's a Wonderful Life" -  at Zeitgeist Multi-disciplinary Arts Center, New Orleans, on Sunday 20th December, 2009 - the event promises to be a sell-out success.

Proceeds from the production will be donated to locally-based post-Katrina rebuilding non-profit organization Common Ground Relief and all the cast and crew - as well as scriptwriter Tony Palermo - have provided their services at no charge.

Tickets are $10 (plus a voluntary contribution), and checks should be made payable to "IAWL-NOLA, llc". Ticket applications should be mailed to Zeitgeist Multi-disciplinary Arts Center at the above address and please include your name and address so that we can mail your tickets to you. Please clearly mark your envelope "IAWL" (It's a Wonderful Life).

For any enquiries regarding ticket sales, sponsorship, donations, etc, please contact the production office direct by clicking the "Contact Us" button above.

NOLA VOice Talent's radio-play "It's a Wonderful Life" received a promotional boost when WDSU-TV Channel 6 interviewed co-producers Stephen James and Bill Lee - and the pair even got to perform a short scene!

Please note: You will find that the video has not been embedded in this site, so please click on the link "Watch on You Tube" which takes you directly to YouTube, or click here to view video: http://www.youtube.com/watch?v=MH5drlGNYyA )

Rehearsals for NOLA Voice Talent's inaugural radio play of "It's a Wonderful Life" have been extremely successful, and the cast is impatient to get the production "on the boards" already.

The production, to be held on Sunday 20th December at Zeitgeist Multicultural Arts Center in New Orleans, is being organized by NOLA Voice Talent to benefit urban regeneration post-Katrina, through the New Orleans-based charity Common Ground Relief.

Co-produced by Bill Lee and Stephen James, and directed by Stephen James with the assistance of Tony Palermo, the production of the popular Movie "It's a Wonderful Life"  will be held in radio-theatre style, similar to the way that radio drama was broadcast live in the 1940s, when the live audience could see the voice actors ‘behind the mic’ with their scripts.

Proceeds from the Christmas production(s) will be donated to New Orleans-based non-profit organization Common Ground Relief (http://www.commongroundrelief.org/) and, co-producer Bill Lee commented, “All the actors and crew are giving their time and expertise at no charge in support of this great city, and we have also attracted interest from a number of sponsors." Interest has also been received for a further performance, and it is also hoped that this production may evolve as a radio broadcast, subject to interest from appropriate parties

The performance will be held on Sunday 20th December (7.30pm) at Zeitgeist Multi-disciplinary Arts Centre at 1618 Oretha Castle Haley Blvd. Tickets are just $10.00 (plus a voluntary donation) and are available initially by contacting the production office at stephenwordsmith@yahoo.com.

October 7th, 2009
Los Angeles director and scriptwriter gives his support to NOLA radio/theater benefit production of It's A Wonderful Life 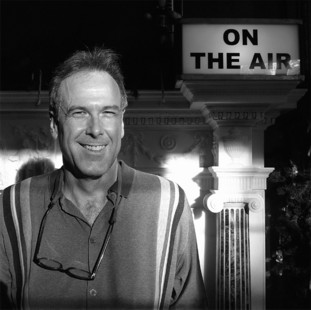 Los Angeles-based dramatist Tony Palermo has offered his support to a radio-style production of the classic movie "It's a Wonderful Life" by a group of voice-over actors in New Orleans.

Tony Palermo has written, directed and scored many radio plays for public radio, The Museum of Television and Radio, the United Nations, on stage and in recordings. He has done everything from super-heroes to soap operas, detective shows, westerns, horror stories, historical dramas, and science-fiction.

"I’m a great lover of the Crescent City and would love to aid charities in the rebuilding effort," said Tony. "So, I’m willing to give every help, including scripts, sound effects and background music, and even directing the performance."

As a result of Tony Palermo's support, the  production has been brought forward to take place sometime in November/December of this year - a year earlier than initially intended. It will be held as a radio-theatre-style production in a "behind the mic" performance, similar to WTN's "A Prairie Home Companion" broadcast on NPR and many and varied productions written and directed by Tony Palermo. Click here for brief bio and credits.